René Grousset (1885-1952) is part of a family of academics. He studied in Montpellier where he obtained his degree in history and geography at the age of 18. He is passionate about Asia, which he considers in its entirety and with the desire to make orientalist scholarly works accessible to the educated public. After the Great War, where he was seriously injured, he divided his activities between three areas: museum administration, an impressive production of books and education. A great humanist, his abundant publications arouse both astonishment and admiration by the extent and mastery of the knowledge they imply. With "In the footsteps of the Buddha" (1929), Grousset takes the reader along in a description of civilizations in connection with the trip from China to India by the pilgrim Hiuan-tsang (7th century). He was elected to the Académie française in 1946. 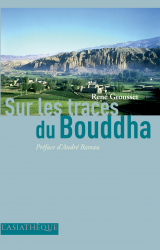