Vahram Martirosyan, born in 1957, is part of the new generation of Armenian writers who have emerged since independence. He worked for Armenian television before founding, with Violette Krikorian, Bnagir, an avant-garde literary review. At the same time, his novels are serialized in newspapers ... as in Balzac's time! One of his books, Glissement de terrain, was published in a French edition by les 400 coups. 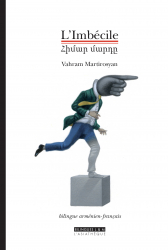