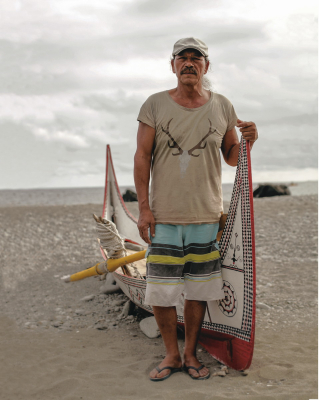 Syaman Rapongan was born on October 31, 1957 on Ponso no Tao, a small island off the eastern coast of Taiwan. He belongs to the Tao group, one of 16 indigenous groups officially recognized today by the government of the Republic of China in Taiwan. Having gone to study and work on the Taiwanese “mainland”, Syaman Rapongan took part in numerous movements for the defense of indigenous rights and returned to his native island at the end of the 1980s, to relearn and highlight the ancestral cultural practices of the Tao linked to the ocean. Author of nine books, including collections of legends, essays, short stories and novels, in which he recounts his daily life and that of members of his community, as well as his travels to the other islands of the Pacific Ocean. A collection of stories has been translated into French: La Mémoire des vague (Tigre de Papier, 2009). Translation: Marie-Paule Chamayou, as well as a story in n ° 1 of the review Jentayu.