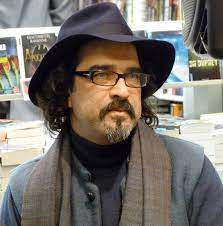 Atiq Rahimi, born February 26, 1962 in Kabul, Afghanistan, is a novelist and director of dual French and Afghan nationality. He received the Goncourt Prize on November 10, 2008 for his novel Syngué sabour. Stone of patience. After applying for political asylum in France, granted in 1984, he obtained his doctorate in audiovisual technology at the Sorbonne. In 2000, he published his first novel, Terre et Cendres. He adapted it to the cinema by directing his first feature film, Terre et Cendres, co-written with Iranian filmmaker Kambuzia Partovi, presented in the “Un certain regard” section at the 2004 Cannes Film Festival3, where he won the Regard vers l 'to come up. In the meantime, he released a second novel, The Thousand Houses of Dreams and Terror, published in 2002, and directed two documentaries, We shared bread and salt and Afghanistan, an impossible state?