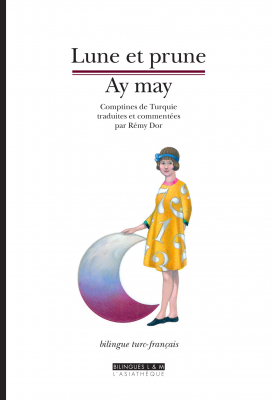 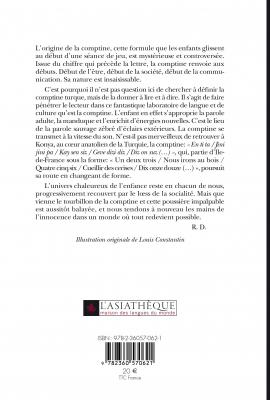 
Book edited with the assistance of IFÉAC.

A folk genre which is still largely unstudied, the ditty or nursery rhyme (in French "comptine") is recited by children at the start of a game. The origin of the nursery rhyme remains mysterious and controversial. Coming from the digit which preceeds the letter, the nursery rhyme takes us back to the beginnings of communication and remains an elusive phenomenon as each child assimilates the nursery rhyme and adjust it as they like. Composed in part of the "wild words" created against the rules of the maternal language, these rhymes preserve, in a way, the memory of being able to pronounce as a child all the languages of the world. The rhymes come from the archives of Pertev Naili Boratev, a pioneer in the study of Turkish folklore.

Rémy Dor, university professor, linguist and ethnologist of the Turkish world, previously published at the Asiathèque in the “Bilingual L & M” collection five works devoted to various aspects of literary creation, oral or written tradition: lyric chantefables, tongue twisters, logogriphs, rhymes and riddles. He is a professor at Inalco.