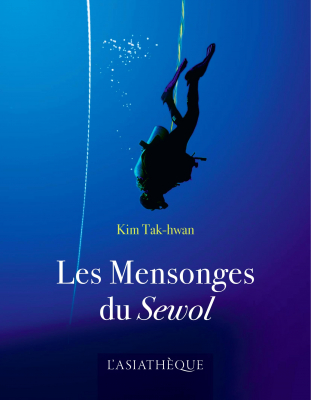 A true poignant novel with a very contemporary resonance, against the backdrop of the daily life of the divers charged with exploring the wreck of the Sewol.

South Korea, April 16th, 2014; the Sewol shipwreck cost the life of 304 people, most of them were teenagers on a school trip. An huge scandal that highlights multiple failings, especially in the organization of costguards. This drama and its aftermath will contribute to the deposition of former korean president Park Geun-hye. The story takes the form of a written statement of the narrator - a professional diver - intended to exonerate one of his colleagues who is accused of manslaughter. He evokes the infernal search for corpses through the obscure labyrinth of the wreck, the serious trauma suffered by the divers and denounces the carelessness with which the operations were carried out, as well as the unfair accusations hold against those who have devoted themselves to return the bodies to the families. The author does not cite the name of the ship, nor those of the real protagonists, as he wish to give the novel an universal scope. He indicates in the afterword that the diver he used as model passed away. The investigation following his death led to the conclusion of a suicide. Kim Takhwan, born in 1968, is the author of successful historical novels, which have regularly been adapted to television. A committed writer, he draws his themes from Korean history to denounce injustices, call for a citizen revolution and encourage civic action. Only one of his books, Les Romans meurtriers, has been  translated in French and published by Philippe Picquier, in 2010.

Kim Tak-hwan, South Korean writer, was born in 1968. After teaching at the Higher Institute Korean in science and technology, he has devoted himself entirely to writing since 2009. He is the author of bestselling historical novels that have been the subject of numerous adaptations to the television. A committed writer, he draws his themes from Korean history to denounce the injustices, call for a citizen revolution and incite civic action. One of his books was published in French translation, Les Romans meurtriers, by Philippe Picquier, in 2010.