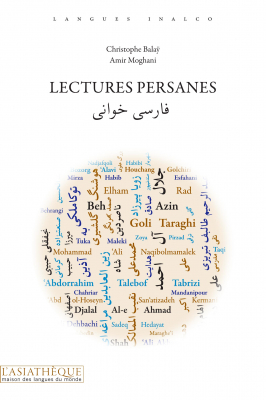 Persian Readings is designed to follow the Persian Handbookvolume 1 published in l'Asiathèque. Christophe Balaÿ is co-author of the two works. It will be used in particular by students of Persian havingfinished volume 1.This work is also defined as an anthology of texts literary and press texts written in Persian, since the middle of the century to the present day. These texts are offered in Persian and accompanied by an unpublished French translation by Christophe Balaÿ and Amir Moghani. Literary texts and certain press articles are the subject of a commentary on the style of the text, the language of the author and the writing context of the work from which the text is extracted.(Book + 1 CD mp3)

Christophe Balaÿ has been professor of Persian language and literature since 1989 at the National Institute of Oriental Languages ​​and Civilizations. He holds a doctorate in French literature and a doctorate in letters, specializing in Iranian studies. He has published Aux sources de la nouvelle persane (Paris, ADPF, 1983), and The genesis of the modern Persian novel (Téhéran, Ifri-Moïn, 1998). He continues a work of translation of works of modern and contemporary Persian prose started with a selection of short stories by Sadegh Hedayat (The man who killed his soul, Paris, Phébus 1999), works by Houhang Golchiri (Chronicle of the history of magi, Le roi des noir-vêtus, Paris, éd.L'Invention), a novel by Shahrnoush Parsipour (Femmes sans hommes, Paris, éd. Lettres Persanes, 2006 rééd. 2012), the complete novel by Zoya Pirzad (five novels and collections of short stories, Paris, éd. Zulma), a novel by Fariba Vafi (Secrets de rue, Paris, éd. Zulma) and recently an unpublished novel in Persian by Mahmoud Dowlatabadi, Le Colonel, (Paris, ed. Buchet-Chastel, 2012). Christophe Balaÿ translated the poetry of Yadollah Royaï: And death was therefore something else, Cahiers de Royaumont (in coll.), Ed. Créaphis, 1997; Signatures (Tehran, ed. Caravanes); Versées labiales, Ed. Tarabuste, 2013. He is currently preparing to edit a history of modern Persian prose.

Amir Moghani is a lecturer at INALCO and attached to the Center for the Study and Research on Literatures and Oralities of the World (CERLOM). His research themes are the didactics of Persian as a foreign language, intercultural communication and translation studies (theories, didactics, history and criticism of translation). He is also a translator of contemporary Afghan (Kh. Nawisa) and Iranian (B. Alavi, Gh. Alizâdeh, Sh. Meskoob, E. Nabavi, M. Ravânipour) literature.