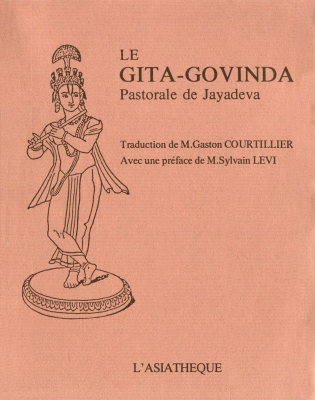 This famous Brahman text, originally written in Sanskrit, is a chant in honor of Krishna. The ardor of the chant is comparable to that of the Song of Songs. The distress of Radha, as she awaits Krishna, is the silent call of the spirit in search of the divine.

Gaston Courtillier (1877-1933) was a French orientalist. He was lecturer at the Faculty of Letters of Strasbourg in 1930 and translated Sanskrit texts into French.

Sylvain Lévi (1863-1935), French indologist, was an honorary member of the French School of the Far East. Agrégé de Lettres, he learned Sanskrit at the École Pratique des Hautes Etudes in 1883, before being appointed lecturer. Holder of the chair of Sanskrit language and literature at the Collège de France from 1894, he participated three years later in his first one-year mission to India, Nepal and Japan, before returning via Russia via Siberia. . In 1913, he studied in Saint Petersburg the manuscripts of the Tokharians (Indo-European people established in the 7th century BC in western China) and brought their language closer to Sanskrit, thus contributing to its decryption. In 1921, he carried out a second long mission in India, Nepal and the Far East (Indochina, Japan, China) then returned via Manchuria and Soviet Russia in 1923.