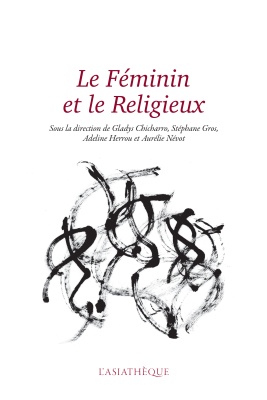 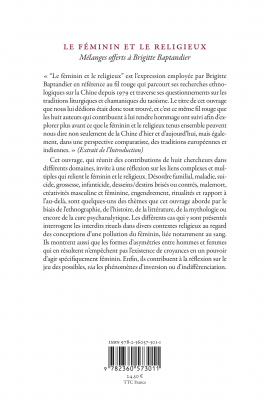 (The Feminine and the Religious)

""Le féminin et le religieux" (the feminine and the religious) is the expression used by Brigitte Baptandier in reference to the red thread that runs through her ethnological research on China since 1979 and crosses her questioning on the liturgical and shamanic traditions of Taoism. The title of this book, which we dedicate to her, was therefore quite appropriate, and it is this same red thread that the eight authors who contribute to paying homage to her have followed in order to explore further what the feminine and the religious held together can tell us not only about China of yesterday and today, but also, in a comparative perspective, about European and Indian traditions." (Excerpt from the Introduction)

This book, which brings together contributions from eight scholars in different fields, invites reflection on the complex and multiple links that connect the feminine and the religious. Family disorder, illness, suicide, pregnancy, infanticide, broken or thwarted designs, death, masculine and feminine creativity, begetting, rituals and the relationship to the afterlife are some of the themes that this book addresses through ethnography, history, literature, mythology and psychoanalysis. The different cases presented in this book question the ritual prohibitions in various religious contexts with regard to the conceptions of a pollution of the feminine, linked in particular to blood. They also show that the resulting forms of asymmetry between men and women do not prevent the existence of a specifically feminine power to act. Finally, they contribute to the reflection on the game of possibilities, via the phenomena of inversion or indifferentiation.

Professor Emeritus at the National Institute of Oriental Languages and Civilizations (Inalco), Catherine Depseux is a specialist in representations of the body, health and longevity techniques in Chinese medicine and Taoism. She conducts research on internal alchemy in Taoism, and more specifically internal alchemy techniques for women, and has published several studies on women in Taoism. She is notably the author of Immortelles de la Chine ancienne. Taoïsme et alchimie féminine (1990), Lao-tseu. Le guide de l’insondable (2010), and (with Livia Kohn) Women in Taoism (2003).

Gladys Chicharro is an ethnologist and sinologist, lecturer in the department of education sciences at the University of Paris 8 (EX PERI CE Laboratory). Her research focuses on issues of education, transmission, and childhood in urban China. She has notably published le Fardeau des petits empereurs. Une génération d’enfants uniques en Chine (2010). Several of his articles or book chapters also focus on the learning and writing practices of the young ones.

Adeline Herrou is an ethnologist, research director at the CNRS (Laboratory of Ethnology and Comparative Sociology). It was through research on Taoist masters and temples in central China that she approached the study of Chinese society today. She is the author of la Vie entre soi. Les moines taoïstes aujourd’hui en Chine (2005). From a comparative perspective, she coordinated, among other things, the work Une jour dans une vie. Une journée dans une vie. Une vie dans une journée. Des ascètes et des moines aujourd’hui (2018).

Stéphane Gros is an ethnologist, researcher at the CNRS (Centre for Himalayan Studies). He is the author of a monograph (la Part manquante, 2012), and about twenty articles or book chapters on the minorities of south-west China and issues of ethnicity, power, and ethnohistory. He is also the editor or co-editor of several books and special issues in the field of Chinese studies or anthropology.

Aurélie Névot is an anthropologist, researcher at the CNRS. She is the author of several books (Comme le sel, je suis le cours de l'eau, 2008; Versets chamaniques, 2013; La Couronne de l'Orient, 2013; Masters of Psalmody, 2019) and articles or chapters of books mainly devoted to the Nip'a (to the scriptural shamanism of this branch of the Chinese Yi nationality and to the relations that the latter maintains with the Chinese power). She recently wrote a book on theoretical anthropology (le Corps effacé, 2021).

Alain Arrault is director of studies at l’École française d’Extrême-Orient and associated with the Center for Studies on Modern and Contemporary China (EHESS). He obtained a doctorate in Chinese studies (1995) after a master's degree in philosophy (1985), and was professor of Chinese studies at the University of Liège (Belgium) between 1996 and 2000. His first field of interest in studies Chinese was the history of thought and religion in premodern China (Song and Ming dynasties), especially Wang Yangming and Shao Yong. He then focused on the history of Chinese annual calendars from the 3rd century BCE to the 10th century. In 2002, he participated in studies on « religion commune », in particular on religious practices in Hunan province, analyzing domestic statuary from the 16th century to the beginning of the 20th century and conducting field surveys. This work has resulted, among other things, in the recent publication of A History of Cultic Images in China. The Domestic Statuary in Hunan (2020, CUHK-EFE O).

Marine Carrin is Emeritus Research Director (CNR S) at the Center for Social Anthropology in Toulouse. She has worked on the Santals and the tribes of India and on the worship of the bhuta in Karnataka. She is the author of three books on Santal, including Parler des dieux: Discours rituel santal entre l’oral et l’écrit (2015). She has co-edited several books on sandalwood texts, ethnicity, transmission, and entry into writing. M. Carrin is currently preparing a book on indigenous knowledge and edits l’Encyclopédie des religions des peuples indigènes d’Asie du Sud (Brill). She is also planning to publish a book on rites and communities in South Kanara.

Rainier Lanselle is director of studies at École pratique des hautes études (EPHE, IVth Section, Historical and Philological Sciences) and member of Centre de recherche sur les civilisations de l’Asie orientale. His field of study is fictional literature from the Yuan to the Qing (novel, story, theatre), particularly in relation to the forms of expression of subjectivity. Also a psychoanalyst, he has published on the question of the reception of psychoanalysis in China. His curriculum vitae with presentation of his activities and teachings, and his list of publications are on https://cv.archives-ouvertes.fr/rainier-lanselle.

Françoise Lauwaert is honorary professor at université libre de Bruxelles. She taught there the history and anthropology of Imperial China, as well as classical Chinese. She has also given courses in the translation of humanities texts at the Institute for Translation and Interpretation in Brussels. Her interests focus on the links between law and kinship, Chinese writing, museography and, more recently, aspects related to gender, notably the representation of male violence in imperial China. Among his publications, we can cite the books Recevoir, conserver, transmettre : l’adoption en Chine traditionnelle (1991), le Meurtre en famille. Parricide et infanticide en Chine (XVIIe- XIXe siècles) (1999), and Puissance et pouvoirs de l’écriture chinoise (2016).

Claudine Vassas is an ethnologist, director of research emeritus at the CNRS, member of Centre d’anthropologie sociale, in Toulouse. She has worked mainly in European societies on the construction of religious identities (Christian, Orthodox and Jewish) by favoring what she calls "the feminine part of religion". Her career is punctuated by numerous publications approaching this question from various angles, including the most recent: Présences du féminin dans le judaïsme » (Clio, 2016, no 44), which offers an itinerary and a bibliography of her work, and the book Esther le nom voilé (2016).

Mayfair Yang is an anthropologist and professor in the Department of Religious Studies and the Department of East Asian Studies at the University of California, Santa Barbara. She is the author of Re-enchanting Modernity: Ritual Economy and Society in Wenzhou, China (2020), and Gifts, Favors, and Banquets: the Art of Social Relationships in China (1994, American Ethnological Society award) . She is also the editor of Spaces of Their Own: Women's Public Sphere in Transnational China (1999), and Chinese Religiosities: Afflictions of Modernity and State Formation (2008).

— Écrire au féminin (Writing in the feminine)
by Claudine Vassas

The collection "Empreintes chinoises" is directed by Catherine Despeux. Beyond fashions and disciplines, the "Empreintes chinoises" collection seeks in the field of possibilities of what touches us in certain aspects of Chinese culture, these imprints which, such as those left by the animals at the origin of Chinese writing, are on the filigree of the culture of the Middle Kingdom. The books in the collection invite you on an inner journey encountering the other one. They bring the reader into the intimacy of men and women, whether they are scholars or Chinese painters, strongly committed to spirituality, from little known ethnic groups or communities... ; they make discover Chinese culture with its sensibilities, its imagination, its representations, its beauty.