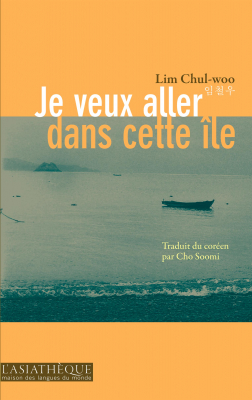 One of the great novels on childhood in a fishing village on a remote island of South Korea, which reaches the universal.

Since its first publication in Korea in 1991, Je veux aller dans cette île (The Island) has attracted widespread public attention, owing to its unique style. Through a series of dramatic, authentic, and frankly comic episodes, Lim Chul-woo brings the reader on a journey with him to his home island. Remembrance, tenderness, tradition: these are a few of the subjects that The Island touches on, along with the beauty of human relations in these rural communities, isolated from the modern world. Lim Chul-woo, born in 1954, is the author of various powerful works that have earned him prestigious literary awards and international recognition. Je veux aller dans cette île (The Island), directly inspired from the world of his childhood, has been adapted into a film (Kŭ sŏm'e kago sipta / To the Starry Island) which he co-wrote with Lee Chang-dong (who also wrote the postface of 'Je veux aller dans cette île') and which was directed by Park Kwang-su.

'The Island' : the English version is available in English bookstores.

Lim Chul-woo, born in 1954, publishes his first short story, "Dog Thief" in 1981 and quickly became known thanks to numerous works (including "My Father's Land", published in French under the title Terre des ancêtres, Paris, Imago, 2012). The Island won him the votes of the Korean public and a film adaptation ("To the Starry Island") of which he was the co-writer with the director Lee Chang-dong and the director Park Kwang-su. We can see Lim Chul-woo in the documentary series created for Arte by Jacques Debs, "La Corée du Sud, le pays aux multiples miracles", aired from November 2 to 6, 2015 (episode devoted to the islands: Wando and Jeju).

Patrick Maurus is University Professor at INALCO. A specialist in Korea (North and South), he is also a specialist in Korean literature, and is the author of a large number of translations from Korean. He directs the “Korean Letters” collection at Actes Sud and the Tan’gun magazine at Harmattan.