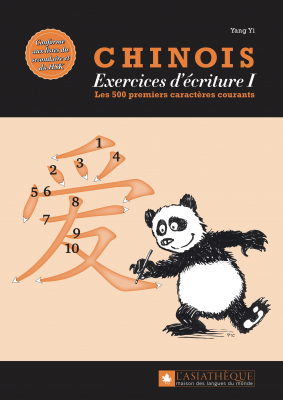 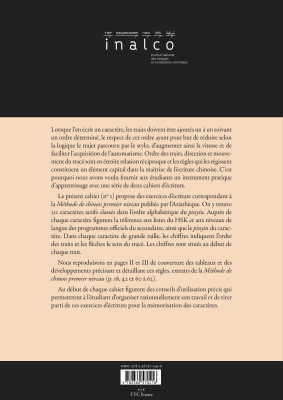 These five hundred characters match the characters taught in "Méthode de chinois: premier niveau" (Chinese method: Level One) published by L'Asiathèque. Seven characters in seven large squares arranged in vertical columns appear on each page, with reference to the pinyin transcription of character. Two icons to the right of the pinyin indicate whether the character is part of a list of characters from HSK and/or forms part of the list of characters for Secondary Learning. The meaning and order of strokes is indicated by arrows and numbers. The rest of the page is reserved for the student to write the characters into the corresponding square, with three rows of squares provided for each character. The squares of the first row contain an outline of the character repeated several times  which the student can trace for practice. A grid in the background allows the student to correctly identify the placement of different strokes.