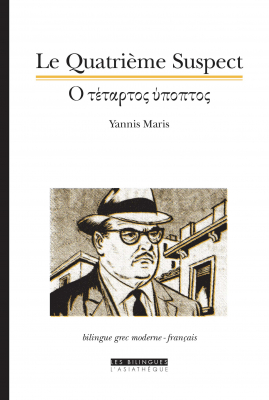 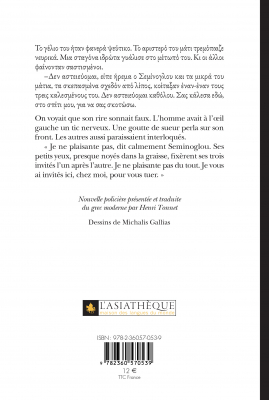 Leonidas Seminoglou invites three of his friends for a game of cards on a rainy evening in Athens. But it soon turns out that the host has other plans for his guests who he says he wants to assassinate for reasons we will discover as the news unfolds. After this declaration, the electricity suddenly goes out and when it comes on again we find a knife stuck in the chest in the middle of the three friends. Which of them is the culprit? Commissioner Bekas and journalist Makris, such as Holmes and Watson, will attempt to solve the mysterious case.

Yannis Maris (1919-1979) is considered the “founding father” of the Hellenic detective story. Greek journalist and man of letters, he left to posterity an important police work, comprising in all more than sixty novels and short stories. Maris creates a universe and an investigator, Commissioner Bekas, typically Greek; even if at Bekas we can sense the influence of Simenon's Maigret. The detective genre cultivated by Maris - the short story "The Fourth Suspect" takes up its most characteristic themes - is essentially an investigative novel combined with adventure and sentimental history.

Henri Tonnet, professor emeritus at the Sorbonne, headed the study center Balkan Studies of Inalco and the Neo-Hellenic Institute of the Sorbonne. Creator, with Guy Saunier, of the Revue des études néo-helleniques, he was editor in chief of the Cahiers balkaniques.