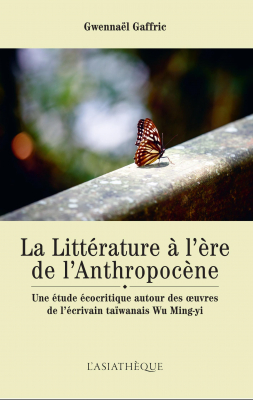 Taking an eco-critical approach, Gwennaël Gaffric discusses the literary treatment of ecological issues in Taiwan. He focuses his study on the works of Wu Ming-yi, a major figure in Taiwanese literary, artistic and militant scenes, but he seeks to expand his presentation by putting in perspective and dialogue texts from other contemporary Taiwanese authors, as well as that reflections proposed by thinkers from several disciplines and all geographical horizons, Asia, Europe and elsewhere. He achieves an impressive synthesis, where ecology becomes an ontology of the relationship between humans and non-humans and an epistemological path to think the Anthropocene. Preface by Stéphane Corcuff. —- Gwennaël Gaffric (born in 1987) is a lecturer in Chinese language and literature at Jean-Moulin Lyon 3 University. He is the author of several articles in French, English and Chinese on Chinese-language literature (China, Hong Kong and Taiwan). A literary translator, he directs the "Taiwan Fiction" collection at l'Asiathèque. Among his translations published at l'Asiathèque : the City of Pains (Wu Nien-jen and Chu Tien-wen), Membrane (Chi Ta-wei) and the Magician on the bridge (Wu Ming-yi). His recent research focuses on contemporary sinophic science fiction. As such, he is also the translator of the trilogy of Liu Cixin (Actes Sud edition) initiated with the Problem with three bodies, and the War of the bubbles, Kao Yi-feng, Mirobole editions. Wu Ming-yi (born in 1971) is a professor of literature at Dong Hwa National University. Known for his environmental commitment, he is a major author of the contemporary Taiwanese literary scene. Sometimes compared to Haruki Murakami and David Mitchell, he has become a singular voice in world literature. Several of his literary works have been published in French: the Sleeping Navigation Lines (You Feng, 2013), the Man with the Faceted Eyes (Stock, 2014, 2014 Fiction Prize at the Ouessant International Book of Island Books), the Magician on the bridge (L'Asiathèque, 2017) and a short story from the Taipei anthology, Histoires at the corner of the street (L'Asiathèque, 2017).

"... Gaffric’s reading of Wu Ming-yi extends a compound prism for grasping multiple ways for literature and environmental action to interrogate one another in today’s Anthropocene – insights translatable indeed far beyond Taiwan’s shores. ..."

Stéphane Corcuff (born in Brest in 1971) obtained his doctorate in 2000 from the Institute of Political Studies in Paris. A teacher-researcher specializing in the Chinese world, he particularly studies Taiwan - where he lived for long periods - from the perspective of the identity dynamics of its margins, its geopolitical history and its political recomposition. Director of the Taipei Branch of CEFC 2013 to 2017, he is a member of the editorial board of "China Perspectives".