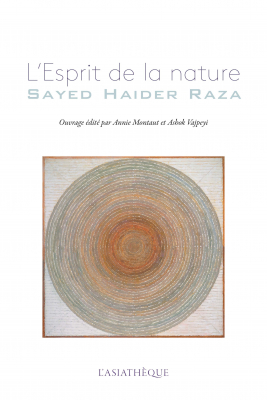 (The Spirit of Nature)

L’Esprit de la nature : Sayed Haider Raza (The Spirit of Nature: Sayed Haider Raza), is a collective work edited by Ashok Vajpeyi and Annie Montaut, bringing together contributions from art critics, artists and art historians concerning Sayed Haider Raza, one of the major painters of the twentieth century who lived in France, but was still immersed in Indian culture. It aims to articulate the spiritual dimension of his work that all critics unanimously recognise in the artist's paintings - an ethics of cohabitation with nature. The mode of cohabitation offered by Raza's abstract art is understood as a partnership that establishes respect and love for the elementary universe in conjunction with the feeling of being consubstantial with them. To this he adds secular Indian traditions, both in the great classical texts and in popular beliefs and literature oral or written vernacular. The original trajectory of Sayed Haider Raza (1922-2016), born and raised in the middle of the forests of Central India, then co-founder of the Bombay Progressive Artist Group, member noticed from the Paris school in the fifties before defining himself outside any school or any movement, focusing on indian aesthetic and philosophical traditions, is the subject of the first part (autobiographical texts by Raza, Vajpeyi). The second places it in the history of Indian and Western art (Waldemar-George, Gaudibert, von Leyden, Dalmia). The third develops a series of more technical analyzes of art and aims of the painter (Bartholomew, Hoskote, Padgaonkar, Vajpeyi, Shahani, Puskale). The last section gathers memories of painters friends and interviews (Khanna, Kumar, Nair). The introduction is by Annie Montaut.

Annie Montaut, professor emeritus of universities, is a great specialist in Vaid's work. She taught modern and contemporary French literature in Canada and India before turning to general linguistics in Nanterre, then to Indian linguistics and Hindi literature at Inalco. She is the author of around a hundred articles dealing in particular with linguistics and Indian literature. She is also a literary translator, mainly from Hindi to French.

Ashok Vajpeyi is an Indian poet, essayist, and literary and cultural critic. He is the founder of Bharat Bhavan in Bhopal (1980), which includes a theater, an adivasi painting museum and modern and which welcomes artists and writers in residence. He has published numerous collections of poetry in Hindi and has created several literary journals in Hindi (Samvat, Pahcan, Kavita Asia, Samasa, Bahuvachan) and in English (Hindi: Languages Discourse Writing, Poorvagrah) which were among the most important revealers of new talent.