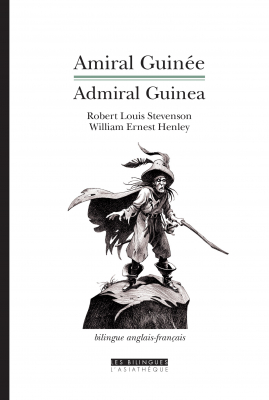 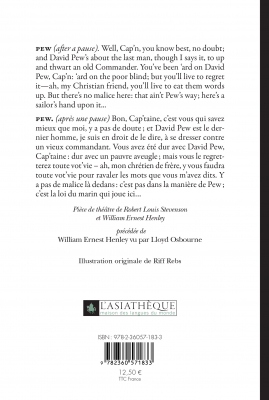 Variations on a character and a tavern from 'Treasure Island' - A lesser-known book by Stevenson, co-written with Henley.

The play 'Admiral Guinea' stages a clash between four characters: Captain Gaunt, nicknamed "Admiral Guinea", is the former commander of a slave ship, a man racked by remorse after a life as a slave trader, having caused the death of his beloved wife, Hester, who was consumed by her husband's vile conduct; Captain Gaunt's daughter, Aréthuse; Christopher French, also known as Kit, a young buccaneer who decided to give up the pirate's life and to follow the right path to marry Aréthuse; and fourthly, Pew, a character who also features in 'Treasure Island,' who has gone blind, and is here a former boatswain of Captain Gaunt. Pew will sow disorder by driving the young Kit, to whom Captain Gaunt has refused the hand of Aréthuse, to take part in a senseless enterprise which will cause a series of misunderstandings and will eventually end with the death of the villain. The fifth and final character, in the background, is Mrs. Drake, the owner of an inn that also appears in 'Treasure Island,' the Admiral Benbow.

Robert Louis Stevenson (1850-1894) is the well-known author of Treasure Island and The Strange Cases of Dr. Jekyll and Mr. Hyde. He struck up a friendship with Henley in the 1880s.

William Ernest Henley (1849-1903) was a British poet, writer and dramatic critic, author of the famous resilience poem "Invictus" he wrote after having a foot amputated. Stevenson was inspired by his handicap to create Treasure Island character Long John Silver.